The apex predators intrigue and inspire humans. There is something within human psychology that makes people fascinated with both human and animal predators. Even just looking at the 15 top grossing movies of all time there are two winning themes – fantasy and predators. Within the top 15 are Jurassic World, The Lion King and Jurassic World: Fallen Kingdom – all three movies centre around powerful predators.

We decided to put this theory to the test and determine what is the value of different sea, land and air predators. It must be remembered, though, that these values do not reflect the global values but rather regionalised values.

Cats vs Dogs
A rivalry myth that has stood the test of time, but in the wild these two groups of predators do interact and clash with each other. Even from a human perspective, there is a cat vs dog rivalry, with 91 countries proving to be cat-centric and 76 countries being dog-centric.

The value of the large land predators varies quite significantly across species and region. The wolf in Yellowstone National Park is by far one of the most valuable land predators that Endangered Wildlife has valued. Extensive studies have been done on this population, especially in terms of how it has been able to re-establish the ecosystem. However, even the wolf value varies based on where it is located. For example, in the Negev Desert, it is only worth c.a. EUR 5,189 per individual, which is well below the Yellowstone National Park value. 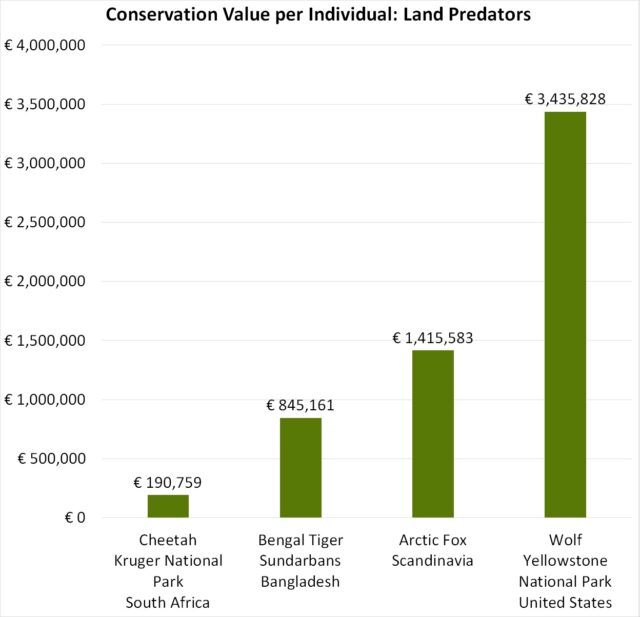 Modern Day T-Rex
The movie genre obsession with Jurassic Park and the great Tyrannosaurus rex may be the reason behind the millions of ornithologists around the world. Birds have an undeniable link to theropod dinosaurs, which includes the T. rex. Besides being bipedal, the emu, ostrich and even chicken have an uncanny resemblance to these dinosaurs in terms of their bone structure.

So how does this primal interest influence the value of different winged predators? Despite the unpopularity of vultures and other raptors on Instagram, the birds of prey offer significant value across the board. In terms of the species that Endangered Wildlife have valued, the dominant species is clearly the bald eagle. However, even from the bald eagle perspective, there is a significant variance in value depending on the state it is found in –one bald eagle in Indiana is worth nearly EUR 3m.

This clearly reflects the ecological and economic importance of birds as both of tourist interest and the role that they play relative to human society. 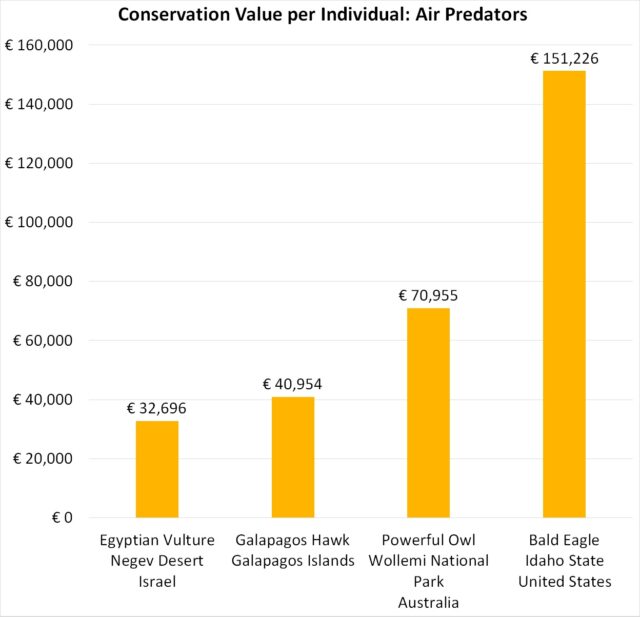 Mammals vs Reptiles vs Fish
While some movies support the fascination with the great predators, others can pull on the heart strings or build on human fears. This holds particularly true with marine predators – from saving Free Willy’s Killer Whale to escaping the Jaws of the great white shark.

Human perception is clearly reflected through the values calculated for the sea predators. The dolphin species draw significantly higher values with increased sympathy to the threats that they face. Tourists want to see the killer whale in Western Canada and people are investing in the fight to save the vaquita.

But the value for the great white shark is lower even though they are critical in maintaining a healthy marine ecosystem. Likewise, the value of the skipjack tuna remains low due to the sheer number of individuals, but clearly their individual value that they create far exceeds their typical market food value. 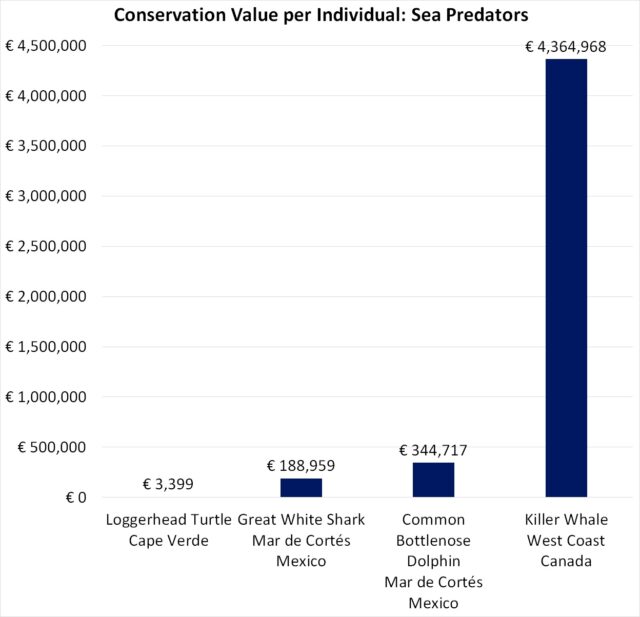 The Ultimate Predator
Each of these apex predators are vital to their ecosystems in maintaining healthy populations. Our own human perceptions of fear need to be overcome when viewing them in their natural environments. Each predator plays its own role, and, in fact, the most effective predator in terms of hunting success is the small dragonfly.

However, outside of the world of nature, perhaps the most dangerous predator for both humans and animals alike is the Homo sapiens, or the modern-day human. The question is therefore: How does the value of the human compare to these other predators?

This average value per individual American clearly raises some question marks about what is truly the most valuable predator in monetary terms.

previous
Is diligence due?
next
Tallinn-based start-up Endangered Wildlife OÜ blazes a trail in calculating financial value of biodiversity

If you wish to receive our latest news in your email box, just subscribe to our newsletter. We won’t spam you, we promise!

If you wish to receive our latest news in your email box, just subscribe to our newsletter. We won’t spam you, we promise!